Suicide Cleanup Kansas City! Crime Scene Cleanup Of Kansas City is a local suicide and trauma scene cleaning company that provides biological cleanup services in and around the Kansas City Area. We are committed to providing our clients with a service that is both discreet and professional while also being compassionate to the situation you and your family are facing. We also specialize in the cleanup of other incidents that are not related to suicide and homicides, such as unattended deaths, hoarding, C. diff, animal waste removal, deodorizing of spaces, and medical accidents. Please contact us with any questions you may have about our remediation services or the severity of your situation.

Attempted suicides are more common than most people can imagine, and family members and friends, already san and confused on what to do, are left to clean up the blood and other bodily fluids. Once the first responders have left the scene of the attempted suicide, where do you go now? How do we clean up all this blood? Does a company provide biohazard cleaning services in Kansas City? Crime Scene Cleanup Of Kansas City is here for you 24 hours a day, 7 days a week in Kansas City. We specialize in the remediation of suicides, homicides, unattended deaths, and attempted suicides. Our local cleaning crew will arrive at your location in unmarked vehicles, discuss the cleaning process with the person in charge of the scene, and then clean and sanitize the property as soon as possible.

When you have experienced the death of a family member or loved one by suicide, it can be devastating, sad, lonely, and confusing. Sometimes family members and friends of the deceased feel responsible. They ask themselves what did I do, I should’ve listened more, and, I didn’t see this coming. You may also discover that friends, co-workers, and other family members don’t always know what to say or how to be supportive and comforting during this time. We know that a suicide loss is different than homicide or natural death; there is the suddenness of the death and there is often no explanation as to why suicide was seen as a choice. There are plenty of support groups in Kansas City, Kansas for survivors of suicide. 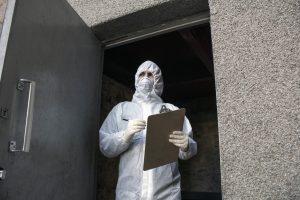 There is a lot of discussion around suicide lately, and for good reason. Suicide is a major problem in the United States, with over 44,000 people dying by suicide every year. That’s more than murder and car accidents combined.

What many people don’t realize is that suicide is not just a problem for adults. Suicide is the second leading cause of death for young people aged 10-24. For every suicide death, there are at least 25 suicide attempts.

There are many reasons why someone might try to commit suicide. Some people might be feeling overwhelmed by problems and see suicide as the only way out. Others might be dealing with mental health issues like depression or anxiety, which can make life feel unbearable.

It is always difficult to clean up after a suicide. There is often blood and other body fluids to deal with, not to mention the mess the person made in their final moments.

Even if you are not the one who has to deal with the aftermath, it is important to be respectful of those who are. Do not talk about what happened in front of those who are grieving. Be patient and understanding, and let them mourn in their own way.

Fill out the information below and we will contact you as soon as possible to arrange assistance.